Notice anything unwelcoming at Liberty Plaza? Occupy the NYC Department of Buildings' Inbox!

SCROLL DOWN FOR A DIRECT ACTION
Liberty Plaza, also known as Zuccotti Park, is a Privately Owned Public Space (POPS). POPS were established as mechanism through which a property owner/developer that wants to build a structure that is taller, wider, or otherwise outside of the property’s zoning designation, can do so. In other words, by building POPS that are theoretically welcoming spaces, property owners/developers can increase the size of their building, and the size of their profit, beyond the standard limit.
Liberty Plaza was created through such an agreement. "One Liberty Plaza" was built larger than local zoning regulations permitted, and Lower Manhattan received a park in return.
The New York City Zoning Resolution governs the design of POPS. The Resolution has been revised several times in the last 50 years. With each revision, design specifications for POPS have gotten more detailed. The revisions are based on studies of what makes public spaces in cities functional. The original Resolution included the requirement that at least 50% of frontage between a POPS and the sidewalk be unobstructed. Revisions have added the requirement that paths must be provided through the space, and that those paths connect to adjacent sidewalks for circulation.
We are the public: the beneficiaries of the plaza-for-extra-space-building deal. For the last month, we have been noticing Zoning Resolutions violations at Liberty Park, a POPS that New Yorkers have found particularly functional this fall. We see obstructions that both violate the Resolution and make the plaza unwelcoming.

It is the job of the NYC Department of Buildings to enforce the zoning code. We haven't seen them at Liberty Park. We know they are busy. They don't inspect every building in the city every month. But they do respond to inspection requests and complaints from the public. It's their job
So -- here's what we're going to do: occupy the NYC Department of Buildings Commissioner's inbox. Follow these steps:
1. Point your browser here to reach Commissioner Robert D. LiMandri: http://www.nyc.gov/html/mail/html/maildob.html
2. From the first drop-down, select "Inspection Requests/Complaints."
3. Enter your email address.
4. Cut and paste the message below into the Message box:
"I have observed a violation of zoning rules at 1 LIBERTY PLAZA (Manhattan Block 62; lot 7501). Rails on all sides of privately owned public space plaza are blocking nearly 100% ACCESS FROM the STREET; the same rails also block access to the circulation paths in the plaza. Design of the plaza is governed by the section of the Zoning Code that governs design of all privately owned public spaces. The sidewalk frontage of a public plaza is required to have a minimum 50% of its area free of obstructions (NYC Zon. Res. Art. 3, Ch. 7, S. 70, 37-721). The rails currently obstruct more than 50% of the frontage on all sides. Mandatory circulation paths are required to connect each of the street frontages (37-723). The rails currently interfere with path connection to the street frontages."
5. Submit.
6. When you receive an acknowledgement of receipt in your inbox, forward it to us at occupynycdob@gmail.com. We want to know just how occupied the DOB gets. We will be issuing a press release next week and would like to know how many inspection requests the department is due to respond to.
7. If there are other POPSs in your life that are not as public as they should be, repeat steps 1-5. Put your DOB to work.
#occupyDOB 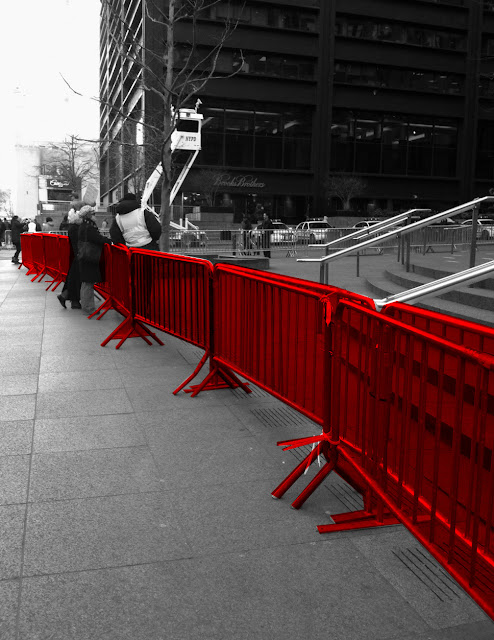 #whOWNSpace arises from the the questions that the #occupywallstreet movement has brought up about ownership and use of open space in New York City, North America, and cities around the world.

This project will be used to:
1- REVEAL conflicting rules and ownerships in the increasingly privatized and commercialized spaces that make up the contemporary neoliberal urban condition

2- QUESTION those rules and the current state of our "public" space; discussing the intentions and conditions surrounding our open spaces

Occupy: The Day After

Occupy: What Architecture Can Do

In Protest, the Power of Place

Privately Owned Park, Open to the Public, May Make Its Own Rules

Meet Me at the Plaza 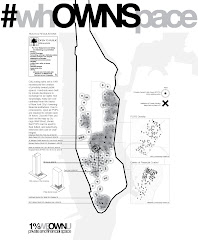